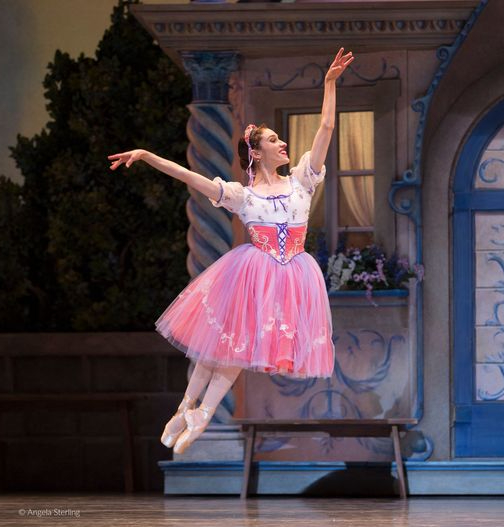 In the spring of 1974, my parents took my sister and me to a performance of George Balanchine and Alexandra Danilova’s Coppélia at New York State Theater. It wasn’t my first ballet, but it was the one that prompted me to ask my mom if I could dance. There was something about the infectious energy on stage. The joy, laughter, and sheer magnificence of it all made me want to join the fun. I still love Coppélia and hope you do as well.

The performance you are about to see is no less engaging or impressive than the one I witnessed at age nine. Props to Leta Biasucci, Ben Griffiths, and Ryan Cardea for a winsome show. PNB shines in this one, from the luminous swells of Léo Delibes’ score, delivered by our magnificent orchestra, to the elaborate hand-sewn couture of each exquisite costume created by PNB’s shop, and each decorative Portuguese tile and dusty volume hand-painted and crafted by our scenic shop. The splendid designs of Roberta Guidi de Bagno were brought to brilliant life, all under the atmospheric lighting of Randall Chiarelli. The entire Company captures the camaraderie and humor of the charming tale staged for us with care and brilliance by Judith Fugate, repetiteur for the George Balanchine Trust and dear friend.

After the 1974 premiere, the production was heralded as a faithful and refreshed take on a classic story ballet from France via Imperial Russia, as remembered and recreated by Balanchine and Danilova. The traditional stories of classical ballet are part of a reexamining happening right now. We question whose stories are being told, whose stories are not, and who is telling the stories, who is represented and who is not, and how characters are represented. Coppélia, for all its merits, takes place in a white, Eurocentric setting. Most classical story ballets do.

We look at the humor as well, seeing it in a different light in this day and age. Where we once might have chuckled at Dr. Coppelius “taking liberties” with Swanilda, we now see his actions as inappropriate and abusive. Dr. Coppelius hasn’t changed, but we have. And when Franz and his friends “rough up” the old Doc or coax him to join them for a few drinks, we see societal norms that are now rightfully being recognized as disturbing and unacceptable.

As we enter the curious wonder of Dr. Coppelius’s workshop in Act II, we identify four automatons through a haze of dust. These are the Doctor’s proud creations. The automatons are recreations of the original dolls from the 1974 production.

One is a Chinese doll. We now recognize Asian stereotyping and cultural appropriation in the design I approved. This doll perpetuates a stereotype that was all too common in works from this era, and it’s shocking and sad to recognize that in 2009, as we developed our production, this didn’t raise more red flags. When we bring Coppélia back to the stage, Roberta and I will work together on a redesign that does not stereotype or show any disrespect to Chinese culture. In the original production in 1974, the Chinese doll, Swanilda, and all of her friends danced with pointed fingers in a manner widely accepted in dominant white culture as representative of Asian dance and movement. I changed this gesture before PNB’s 2010 premiere and worked with the George Balanchine Trust to ensure we honored Balanchine’s choreography and intent, while finding a less offensive manner in which to show arm movements. The dialogue was productive. We acknowledged Balanchine’s progressive views about race and representation. We reasoned Balanchine himself would have changed these stereotypical representations of Asian culture if he were alive to experience the awakening and awareness our nation is having about race, representation, and recent issues of targeted Asian hate.

PNB works frequently with Phil Chan and Georgina Pazcoguin, founders of Final Bow for Yellowface, and we have signed a pledge to help eradicate Asian stereotyping in classical ballet and in our own repertoire. One point Phil has returned to time and time again during our discussions is existing classical works like Coppélia possess true greatness. He is a staunch advocate for keeping all that is wondrous and transporting about these ballets, and correcting what needs to be corrected. The Balanchine Trust is onboard, too, as are Judith Fugate, Roberta Guidi de Bagno, and PNB.

So treasure the laughter, sweetness, and spectacular dancing you are about to see, and not just from Leta and Ben, but from each of the miniature ballerinas from our School in Act III, and the stomping villagers and talented soloists throughout. See how Balanchine infuses Dr. Coppelius’s delusions with hope and promise, and how he shows dance as a source of joy and an opportunity to lift spirits. There’s much to hold dear in this magnificent production and an opportunity to acknowledge we have the ability to take a closer look at the world around us and make changes that incorporate a new knowledge and sensitivity. We can find and create a new refreshed take on a classic story, and it’s time we told some new stories, too.