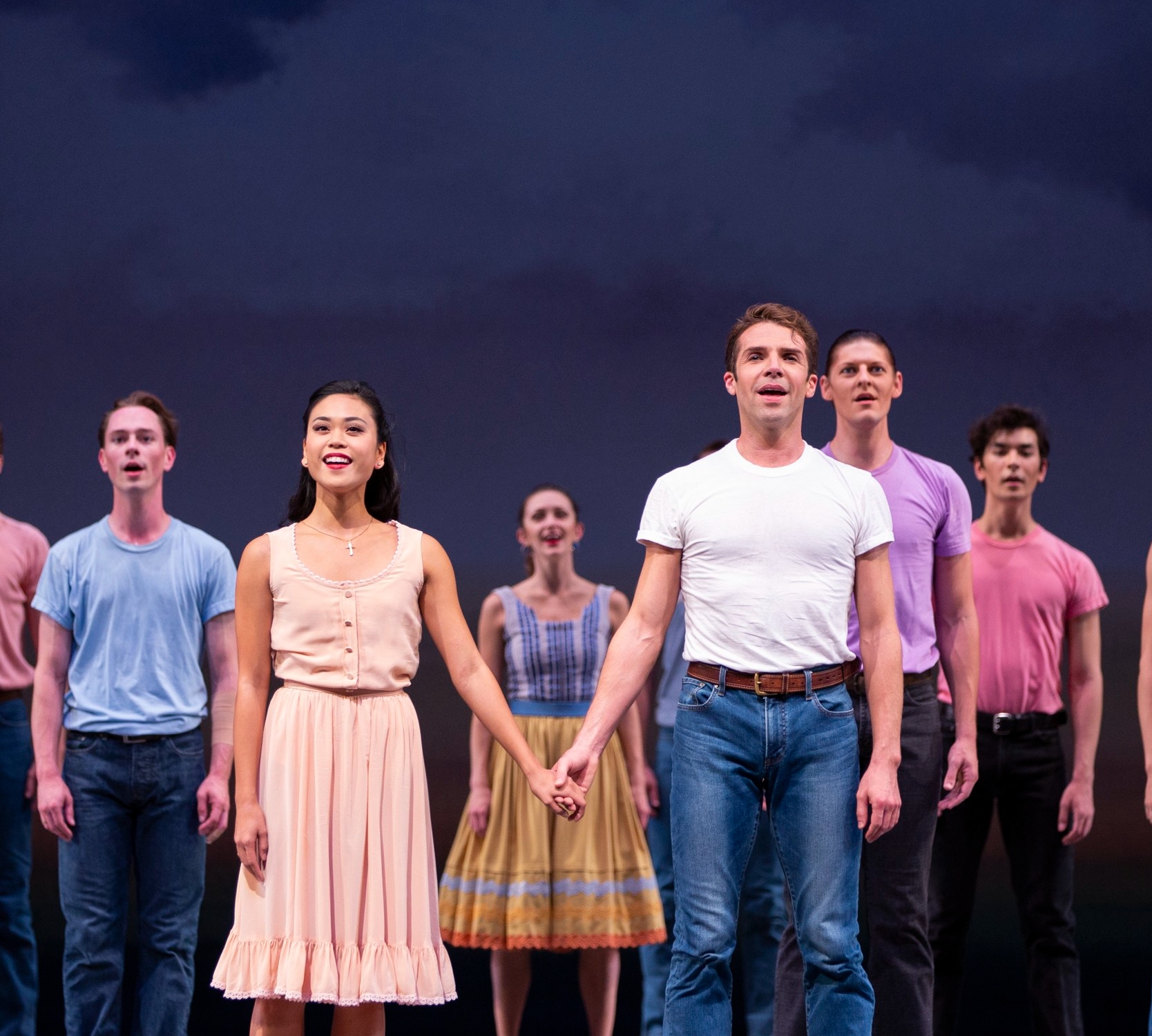 Wait, am I repeating myself? Do I sound cliche?

It feels the same to everyone, doesn’t it, the city? No matter when or where you discover it, it’s very similar, everyone’s experience. Though I once had a friend tell me, “The New York you’re in love with is the new York of the 50s: Greenwich Village, underground jazz clubs, Golden Age musicals to see for only $2, Tennessee Williams at his height, Lenny Bruce…” Everything Mrs. Maisel romanticized.

There is no better celebration of New York than West Side Story, the 1957 musical written by Leonard Bernstein, Stephen Sondheim, Arthur Laurents, and choreographed/directed by the incomparable Jerome Robbins. It’s a piece than never seems to age or have any real signal of fading as a “period piece” within the American cultural canon.

By the mid-1950s, Leonard Bernstein had reached a peak of sorts. The Jewish boy turned classical music titan had skyrocketed to fame in 1943 when, on just a few hours notice, he was asked to make his Carnegie Hall debut with the New York Philharmonic. Bruno Walter fell ill and the management called the then 24-year-old(!) Bernstein the night after he premiered a song cycle called I Hate Music to say, in so many words, “This is it, kid! You’re on!”

The premiere electrified audiences, earning Bernstein overnight fame around the country and the world. The next year Bernstein followed his success as a conductor with a composing success: the Broadway show On The Town based on the ballet Fancy Free he wrote for Jerome Robbins and New York City Ballet.

On the Town was a monster hit. Not only was it funny, sexy, and musically challenging, it boasted a murderer’s row of collaborators. The score was by Leonard Bernstein, directing and choreographing was Mr. Robbins, and penning the book and lyrics were Betty Comden and Adolph Green, the comedy writing duo behind Singin’ In The Rain, The Band Wagon, and darn near every brilliant musical comedy written for stage or screen before 1970. How could it go wrong?

It did…but only for Bernstein. Koussevitzky, then Bernstein’s longtime conducting mentor and the man who pushed Bernstein to be a “serious musician,” attended the opening night premiere. Following the afterparty, Koussy spent four hours shaming Bernstein for the work. To be involved with middle class activities like Broadway and movies was to lose all credibility as a serious classical musician….in Koussevitzky’s opinion

“That was wonderful,” Koussevitzky was reported to have said. “But never do that again.”

It wasn’t until Koussevitzky died in 1951 that Bernstein would return to composing for the Broadway stage. The shows that followed–Wonderful Town and Candide–signaled a more restrained composer than the one in On The Town. Sure, both are comedies in their own right, but Bernstein continued to write scores that underlined social issues and the ways geographical locations affected people who occupy them. The mother/daughter duo at the center of Wonderful Town are distraught to learn that New Yorkers are more, shall we say, “loose” with rules than those of their resident Ohio. Candide’s voyages across the world only diminish his optimism; despite this being the best of all possible worlds, war, famine, and disease run rampant throughout it. Whereas sailors held on to patriotism for a country they were fighting for in On the Town, the new Bernstein could only write stories where hope must be earned by those who occupy this country. Not everyone has it easy in America, or anywhere for that matter.

West Side Story marked a new chapter for Stephen Sondheim.

As a young adult, the absence of his father and the cold, detached nature of his mother found him seeking parental figures elsewhere. He knew his next door neighbor, Oscar Hammerstein II, would, at the very least, allow him to go on and on about how brilliant Jerome Kern was–and perhaps let him ask what working on Show Boat was like.

Oscar approved. He took the young Sondheim under his wing, recognizing that he was not only a brilliant wordsmith (Sondheim loved word puzzles and games), he also understood how music and lyrics can marry to create something remarkable.

Thus, Oscar set upon guiding Sondheim. His first venture into commercial Broadway was penning the music and lyrics to a new show starring Ethel Merman, set to the libretto by a friend Arthur Laurents. The show would be the backstage story of stripper Gypsy Rose Lee and her domineering mother. Merman, however, protested. Sondheim had no official Broadway credits to his name, only shows he had written for Hammerstein at his request. Merman knew this freshman type well, in fact, it nearly killed her career after taking the risk of leading a show called Happy Hunting by newcomers Harold Karr and Matt Dubey. The show was a total flop and Merman swore off working with composers who did not have a hit under their belt. Thus, Sondheim became lyricist and Jule Styne (of Funny Girl and Gentlemen Prefer Blondes fame) wrote the music.

Gypsy was a smash hit. Arthur Laurents’ script and Robbins’ direction were praised for being a biting yet entertaining look at show business while Sondheim’s lyrics were praised alongside and standing out from Jule Styne’s score. With the success of this, Hammerstein knew it was time for another challenge for Sondheim.

West Side Story created a new language for theatre.

Urban stories had appeared on the Broadway stage but through either dramatic plays (Street Scene) or musical comedy vehicles (Guys and Dolls). Within the cinema landscape, Splendor in the Grass and Rebel Without a Cause gave voice to the angst of youth amidst suburban life. Figures like James Dean, Elvis Presley, Natalie Wood, and Warren Beatty were quickly dissolving the Eisenhower era image of youthful hope with a dark undercurrent of cynicism.

Robbins had conceived of an updated Romeo and Juliet story long before the first notes were even written. In the ‘40s, he originally wanted to set the two sides as Jews vs. Catholics. Broadway director and producer Hal Prince would later reminisce that what changed for Robbins was the evolution of Hell’s Kitchen:

“…there’d been a sort of race war with attacks on immigrants, mainly from Puerto Rico. Those tensions changed the whole storyline and made it much more dynamic.”

Robbins cared deeply that the cast reflected the demographics of the story Arthur Laurents wrote: Puerto Ricans vs. the juvenile delinquents…all of which can sing, dance, and act. After all, not only was Robbins a grueling taskmaster, known to throw people out of rehearsals, the music of Bernstein was far from the stock musical comedy structures of the past decade.

West Side weaponized dance. Musical theatre up to this point utilized dance as an expression of pure joy (“Shipoopee” in The Music Man), Freudian yearning (“Dream ballet” from Oklahoma), or tableau (“Slaughter on Fifth Avenue” from On Your Toes). Indeed, choreographers instilled their own choreographic language within the show’s dances–Balanchine with On Your Toes, Agnes DeMille with Rodgers and Hammerstein–but a show had never used dance as its language.

The adage of musical theatre should be: “When words fail, sing.” For West Side, words are near absent and the bodies, their movements tell the story. It was Robbins’ choreography combined with Berntein’s seemingly incongruous score that shook audiences. Now, dance was dangerous, provocative, and, frankly, shocking. Violence could erupt as fast from a pas de deux as a character could break into song.

West Side Story did not sound like any musical before it, either. Bernstein’s Candide two years prior had influences of Viennese waltzes and operettas but remained consistent with the musicality of the era it paid homage to. In West Side, Bernstein combines Latin, Broadway two-step, ballet pas de deux, ballads, and so much more, it feels like a musical cluster of competing genres. And only Bernstein, Robbins, Laurents, and Sondheim could get away with this incongruity and envelope-pushing.

After all, all four men knew what it meant to be immigrants and outsiders. All of them would openly discuss their Jewish heritage but barely spoke of their sexuality, which went hidden for many decades. While Bernstein was married for a large majority of his life to his wife Felicia, his biographer Joan Peyer released a book wherein she claimed he had outed himself, despite never publicly admitting it his entire life.

Laurents kept his sexuality private, namely due to the era. He was blacklisted and forced to testify in front of the House Un-American Activities Committee for a passing remark made to Russell Crouse. To be out as a non-heterosexual person during this time meant to be a cancer to society. As for Sondheim, he stayed quiet about his sexuality as well, and only came out publicly in the last decade.

Biographers of Robbins recounted his bisexuality – he’d had affairs with men of the day like Montgomery Cliff, yet was forever in love with French ballet dancer and fourth wife of George Balanchine, Tanaquil Le Clercq. Like Laurents, Robbins was a target of the House Un-American Activities Committee. Unlike Laurents, Robbins named names, fearing his domineering presence and hidden sexuality would make him an easy target if he re-entered society. Of those he named, the actor Zero Mostel of The Producers fame was one of them, invariably sinking his career as a film and stage actor…until he and Robbins worked together on a new musical produced by West Side Story producer Hal Prince: Fiddler On The Roof.

Geniuses. Every single man behind this story of America: Genius.

Where today can a story as profound and human as West Side Story still be found? It’s a musical that early on addressed issues of racial tolerance. Broadway had addressed racial issues but only in the context of historical settings such as Show Boat. Latinx representations in musicals were nearly non-existent, in actors on stage and in story. What makes West Side work continuously is the love story at its center.

Whenever I revisit West Side Story–and that’s once or twice a year–it consistently surprises me how mature of a story it is. What the West Side Story creators believe America stands for is stunning.

West Side Story shows lengths to which we will go to be with the person we love, someone who does not look like us or come from our neighborhood/background, yet we know we can love because love prevails in this country above violence and division.

Thus the finale remains one of the most moving in performance history. As violence erupts, blood is shed in the name of vengeance. Bigotry fuels this division and, upon the death of Tony, each side recognizes that they have lost themselves, their way, and what they were fighting for.

A heartbreaking revelation of the show is that blind violence prompted by bigotry corrupts innocence. Our country is plagued with this senseless violence: school shootings, the murders of BIPOC individuals at the hands of police officers, church burnings. All make us question: Is this who we are, America?

The men behind West Side Story say: Yes, sadly.

But, there is hope.

As there is darkness, there is always light. The men who created West Side brought together their experiences as immigrants and social outsiders to produce a profound statement on America. Revealing these ugly truths is a learning lesson for the audience which views them decade after decade.

3 thoughts on “One Hand, One Heart: Looking Back on ‘West Side Story’”