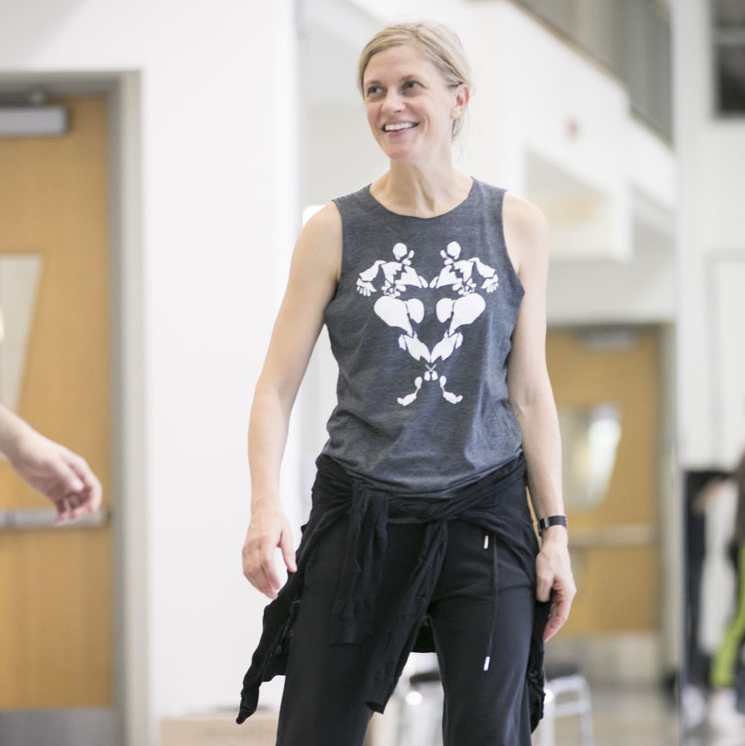 Let’s just soak in the genius of Crystal Pite for a moment.

You’ve probably heard us gushing about this groundbreaking choreographer ever since we first staged Emergence in 2013 (and again now that we’re putting on the American premiere of her piece Plot Point). It’s for good reason: she’s one of the most in-demand choreographers in dance today, and her works leave the audience absolutely breathless.

But it’s not easy to become a world-renowned choreographer, and women are still in the vast minority. Learn more about Crystal Pite and how she got where she is today.

She began her career in choreography at age three.

“It was so simple,” she admits, talking about the time she turned on the record player as a toddler and rehearsed a dance to My Little Red Wagon. “I skipped in one direction for the first verse, and then in the other for the second verse. Obviously, I didn’t know I was choreographing at the time, but when I think back, I was making something. I could repeat it, refine it, make it better.” She went on to choreograph her high school musical.

At 17, she joined Ballet British Columbia.

Pite began with tap dance lessons, then moved naturally to ballet. By the time she was 19, Ballet British Columbia staged her piece Between the Bliss and Me, which was a success. That same year, she performed in William Forsythe’s In the Middle, Somewhat Elevated.

But she knew that wouldn’t be her end point: “I managed to fake my way through the classical technique quite well,” Pite says with a laugh, “but I already had a feeling that ballet wasn’t maybe going to be my final destination.”

In 1996, Pite officially left Ballet BC and moved to Germany to join Forsythe’s Ballett Frankfurt. She worked closely with Forsythe to continue developing new works as she danced in his company.

“As a young choreographer, [Forsythe’s last-minute choreographic process] was just fascinating, and beautiful to see,” she says. “It’s something I aspire to, to hold that kind of rigor and recklessness in balance.”

No big deal, but she has her own company: Kidd Pivot.

As if the demanding roles of professional dancer and emerging choreographer weren’t hectic enough, Pite returned to Canada and formed her own company in 2002. She named her troupe Kidd “for the outlaw, the pirate, the prizefighter,” and Pivot in reference to “something you have to have skill and a technique to achieve perfectly.”

She thinks dance can (maybe) change the world.

“It’s a big question,” Pite says, made tougher by her station as a leader and a tastemaker. “I’m in this position in the world of privilege and safety, as are most people sitting in the theater.

“I’d like to think art’s purpose is to keep channels open, to open channels to the humane. I think that’s what art is meant to do.”

Emergence is a notable exception, but Pite has said she finds pointe shoes limiting. “It changes who the woman is. She’s not grounded. She has another kind of power, but she’s not of the earth.”

She knows that ballet is tough for women.

“I think that young creative women often have to get out of a ballet company, out of that world, early,” Pite says. “They may find that the ideals of the classical-ballet world don’t align with their own interests – that’s a little theory that I have. I can’t imagine any glass ceiling, or any conspiracy, you know? But it could just be that I haven’t spent enough time in the classical ballet world!”

And being a leader can be even tougher.

“A little boy who makes a choice to study ballet is already a maverick, a risk-taker, outside the box,” Pite says, “whereas the little girl who starts ballet, maybe she’s prized for her ability to obey, and to look like everybody.

“Over time, I think what happens is that you end up at a ballet company with an equal number of men and women, but with a disproportionate number of men who are predisposed to be creative, and to be leaders.”

And while she’s a success story in her own right, she’s just as human as the rest of us.

“It’s always terrifying doing something new,” Pite admits, despite being astonishingly good at doing just that.

“I may not feel like what I’m doing at every moment is art, but I know how to craft something,” she says. “It’s through that that I feel most alive, most myself, most joyful.”