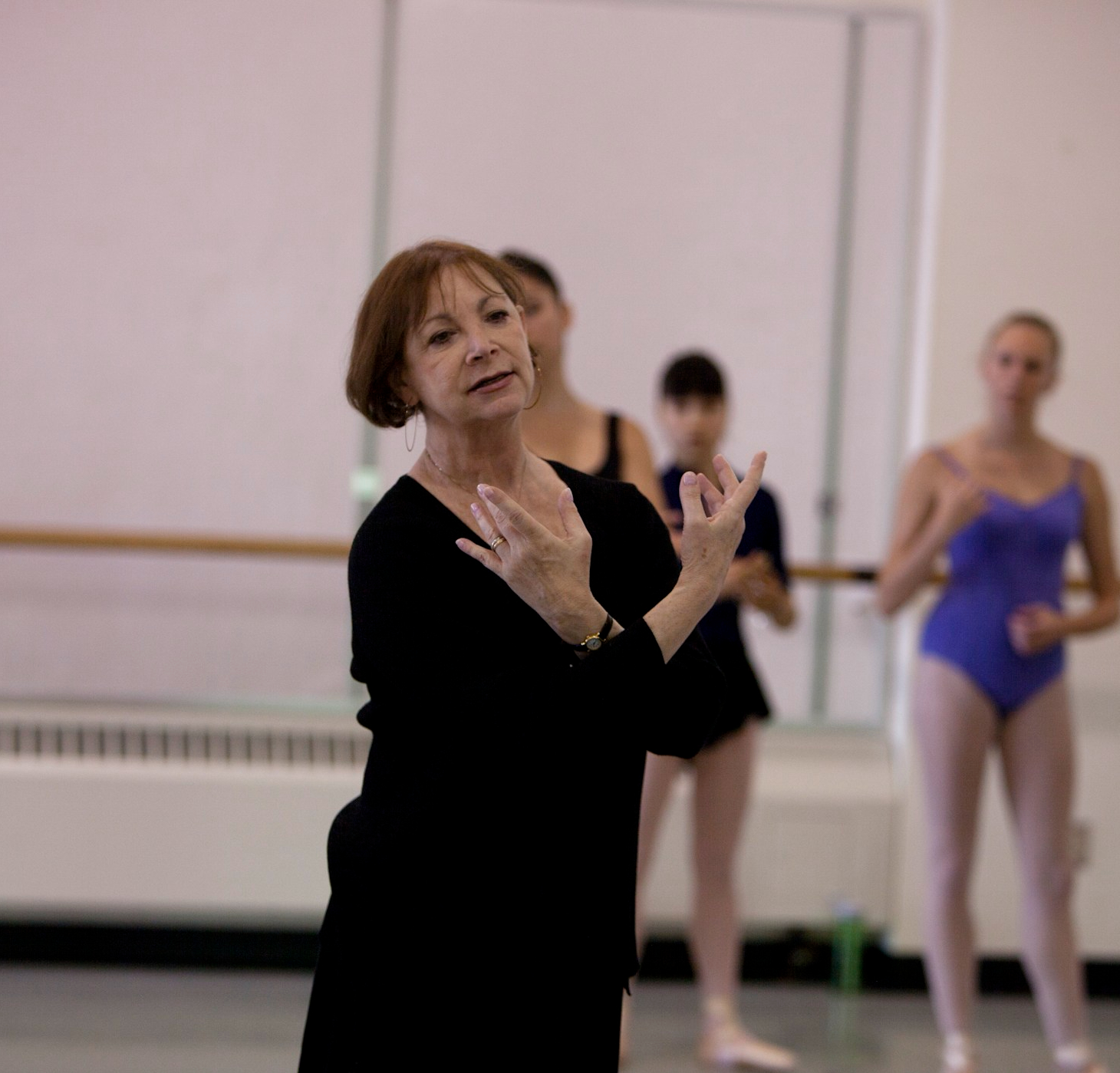 PNB School faculty member Marjorie Thompson has had a legendary career – first working with George Balanchine at New York City Ballet, then teaching the Company and at School of American Ballet before becoming a faculty member at Pacific Northwest Ballet School, where she also developed the PNBConditioning program.

What levels and classes do you teach at PNB School?

This school year I am teaching Level VIII and Professional Division, and sometimes the Company. Since joining the faculty in the summer of 1997 I have taught every level, except for Creative Movement which I only taught once in an emergency.

You worked directly with George Balanchine. Can you share about that experience?

I joined the New York City Ballet before turning 16. After the excitement of learning that I had been chosen and going to the theatre to sign my contract, I learned that I had to go downtown with my mom or dad to get working papers.

The whole time I was a student at School of American Ballet, I never missed a class except for once: the day I was asked to join the Company. The story is my mother insisted that I go to school that day and take my French mid-term. I was a sophomore in high school. Having heard a rumor that Mr. B. [George Balanchine] would be watching class that morning and selecting for the Company, I pleaded to go directly to ballet. Mom remained firm and I went to school. While I was taking the exam, there was a knock on the classroom door. It was Suzy Pilarre. After a few minutes, Mme. Bossy told me to join Suzy in the hall. The first thing she said was that Mr. B had watched almost the whole class and afterwards she and several other students were called into the office and asked if they would like to join the company, Holding back the tears, I congratulated her. That’s when she told me that I too was chosen for the company. I guess Mr. Balanchine was afraid I’d jump into the Hudson River if I heard about my classmates and not me. Life before cell phones!

Working in the studio with Mr. Balanchine was an extraordinary experience. It was a very productive period for Mr. Balanchine. It was also a very exciting period for ballet, especially in New York City. Lincoln Center had just opened. We, the New York City Ballet, opened the State Theatre with a grand gala. A newly remounted A Midsummer’s Night’s Dream was the first ballet to be performed. The photo of me and Mr. B. was of the day he restaged Court Couples for the premier of Midsummer at the State. That was basically my introduction to life as a corps de ballet dancer in NYCB.

Mr. Balanchine’s classes were a revelation. He taught every morning during rehearsal weeks and performance weeks, of which there were many. Class was his laboratory. It was my sanctuary. During layoffs he would teach occasional classes that were longer, maybe two and a half hours. In those classes, he was teaching us how to dance and how to live. It is untrue when people refer to or say, “the Balanchine Technique.” The technique that Balanchine subscribed to was classical ballet technique. What there was and still is, is a Balanchine style. At this point, I sometimes say it is the American style. So much of what he insisted upon is now part the lexicon of ballet in America and all around the world.

I grew up in the New York City Ballet. The seven or eight years of experiences I had in the NYCB informed who I am as a professional and as a woman. Balanchine taught by example. He was the most self-assured person I have ever met. He was stubborn and he was patient. He taught and created masterpieces in the moment. He worked with the dancer who was in front of him, not one he was dreaming of. He saw his work as a craft. He often said he was a ballet builder, an assembler. He was deeply religious. He believed and lived with honor. He valued tradition and respect. He believed that ballet is sacred, that it is a great art form and that he was in service.

As a dancer in New York City Ballet, I danced for JFK on the anniversary of his inauguration. We danced Stars and Stripes. The evening was star studded, from Gene Kelley to Johnny Carson – so thrilling. And sadly, shortly after that we danced Western Symphony at Madison Square Garden for Lyndon Johnson. We toured Europe, we made movies and television shows. And for me, rich experiences have continued to be part of my professional life.

You have taught at many ballet schools and also served as school director in Pennsylvania and Minnesota. How has ballet instruction or your approach to teaching changed over your career? What has remained the same?

There’s a whole period of years that I am going to skip over, although these experiences have very much informed who I am today. An injury and illness curtailed my performing career. Balanchine invited me to teach for the Company and as permanent faculty at School of American Ballet, both of which I did do for a short period, but I needed to experience a little life outside the cloistered world that I had enjoyed for so long.

I became the Director of the Lotte Berk Method, an exclusive exercise establishment in NYC. I learned to run a for profit business, met celebrities and appeared in magazines with them in exercise shoots, television shows, etc. This period would require a whole separate interview so let’s just call it deep background.

Pacific Northwest Ballet School has been very good to me. I have been encouraged to grow within and out of the organization.

Since joining PNB in 1997, I have traveled around the country on our national audition tour. I have traveled to Europe and Canada to be part of symposiums on Conditioning for dancers and dance medicine and science. I developed a program and a business for PNB called PNBConditioning that employed all the most current thinking on conditioning for dancers and the public, as well as using at its core Joseph Pilates’ work.

With the encouragement of PNB I produced two commercial videos for PNB: danceWorks! and Patricia Barker on Pointe. Both were successful and used all over the country. And most recently, my colleague Marisa Albee produced Master Class for Ballet in Form. We are so proud of it. It clearly represents what we teach at Pacific Northwest Ballet School. The four students in the class were from our Level VIII class and PD class. All four students joined professional ballet companies after completing their studies at PNB. I think it would be interesting right now when you haven’t had an opportunity to see your dancer in class or on stage to see basically a template of the outstanding training we provided.

How has it been teaching in a digital classroom this school year?

The digital classroom has been challenging for us all. Just technically it is a nightmare for me, but it is not about the faculty or accompanists or administrative frustrations – it is about our students. The empathy and pride is for them. They are doing a remarkable job. The resilience they demonstrate will help inform the rest of their lives.

Anything else we should know?

I have been teaching now for 55 years! And since I received my second Covid vaccine yesterday, I am confident that I still have good years ahead.

I know that I am a better teacher today than I was half a century ago. I have lived and seen and learned from all my colleagues and equally important is what I have learned from my students. I have found the conferences we do here at PNB to be invaluable. The student in front of me in the classroom is not always the young person in the conference. Seeing her interact with her parents and me and our staff sheds such invaluable light into who that person is. This is such important information as we navigate the rigors of the ballet experience.

Helping guide these young dancers during this time is an honor and responsibility that I take very seriously. Sure, it has been a thrill to see dancers who I’ve worked with for numerous years or just a summer go on to have stellar careers, like: Kiyon Ross and Noelani Pantastico, Lindsi Dec and Rachel Foster, Nick Ade and Maria Chapman. But equally prideful are the students who’ve written for the New Yorker Magazine, become a DC diplomat, raised a family of five and run a ballet school, started a PT or Pilates practice, become an activist, philanthropist, board member, nutritionist, psychotherapist, etc. What makes me proud is that the elements of discipline, organization, passion, and resilience they’ve learned at ballet in our classes has allowed them to pursue their dreams with the same ardor and commitment, passion and integrity that has permitted me the great honor to have spent a life in the service of this great art form: Ballet.

Thank you, Mr. B, for giving me my dance.

One thought on “Q & A: Marjorie Thompson, PNB School Faculty”