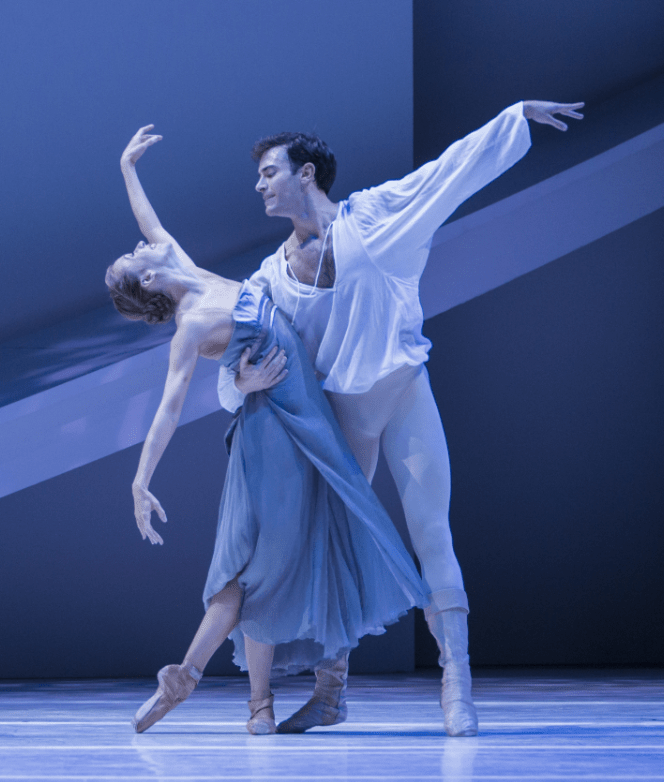 In late January 2008, PNB became the first American company to perform Jean-Christophe Maillot’s Roméo et Juliette, with costumes and sets rented from Maillot’s Les Ballets de Monte-Carlo. In early 2012, PNB’s costume shop, under the direction of Larae Hascall, shop manager since 1987, began building the Company’s own production.  The inspiration for PNB’s first performance and the collaborative efforts behind the creation of PNB’s Roméo et Juliette have their origins a decade or two earlier.

Because of the extended period that PNB has had to prepare this production, Kaplan, in consultation with Zappone and other costume shop employees, has had the opportunity to revisit his original designs, and also to take advantage of improved fabrics that lend themselves to the shape, drape, and movement originally desired.  One example of this is the length of Juliet’s costumes:  audience members who have seen performances in previous seasons might notice that Juliet’s costumes now are the same (longer) length as those for other female characters, a feature of Kaplan’s original designs.

The fabric from Switzerland used in 1996 to construct Juliet’s kimono does not still exist.  Through the combined efforts of Zappone and dyer Wendy Oberlin, a cream and gold blend located at Mill End Store in Portland was dyed the desired green/gold color.  Kaplan believes the resulting robe is even better than the original, in part because it moves more fluidly.

The crocheted tunics (which Kaplan designed to resemble chain mail armor) worn by Tybalt and the Montague and Capulet men provide another example of PNB’s costume shop exceeding Kaplan’s expectations. The designer desired a more powerful look for the crochet than achieved in the original tunics.  Costume shop first hand Luna Pham, with additional assistance in recent weeks from Aleesha Kobernik and Jule Castner, crocheted approximately 20 tunics that elicited high praise from Kaplan.

“PNB dancers, after weeks of strenuous rehearsals, will without doubt look superb in Roméo et Juliette.  Part of that will be due to the months of work by PNB’s costume shop to realize Kaplan’s designs.” —Sheila Dietrich, PNB Archivist