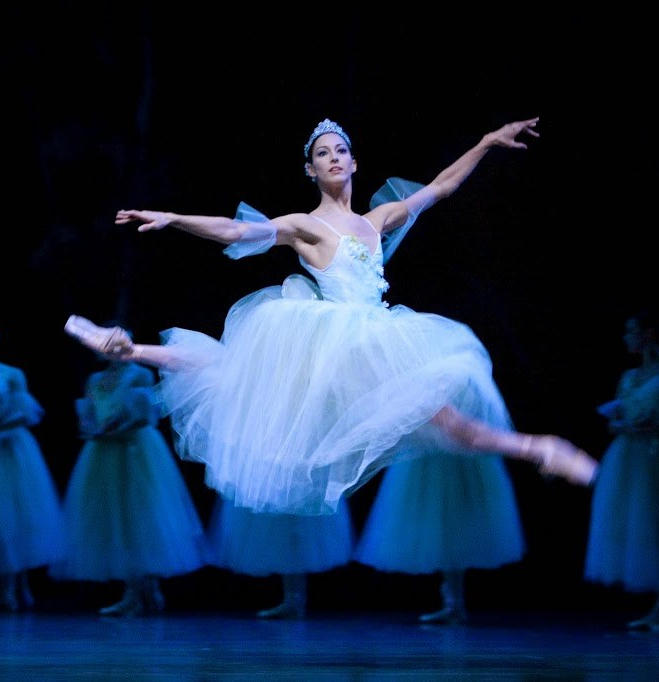 The curtain opens in a dark and gloomy forest on the banks of a pond. Giselle’s tombstone can be seen at the left; the bluish gleam of the moon gives a cold and misty appearance to the scene. Several gamekeepers arrive, hoping to set up an observation post, but Hilarion warns them away: this is the place where the Wilis gather at night, attacking any men who stray into their territory, drowning them or forcing them to dance themselves to their death. Distant chimes strike midnight—the hour when the Wilis appear—and the men flee in terror as will-o’-the-wisps flash threateningly around them.

Myrtha, the queen of the Wilis, arrives on the scene, mysteriously radiant and piercing the shadows of the night. She summons the other Wilis to join her in a fantastic ball. The Wilis, including Moyna and Zulma, present themselves to their sovereign, and soon all of the Wilis are waltzing with abandon, gratifying their love for dancing which they were unable to fulfill in life. Before long, at a sign from the queen, the dance comes to an end, and Myrtha announces the arrival of a new Wili. Giselle appears, rising from her grave, wrapped in a shroud. When Myrtha touches her with her rosemary branch, the shroud falls off and Giselle is transformed into a Wili. She dances with fervor until a sound is heard in the distance. The Wilis disperse and hide themselves.

Some youths are returning from a festival in a neighboring village. The Wilis seek to detain them and try to force them to dance. However, an old man throws himself in their midst warns them of the danger; they barely escape, with the Wilis in hot pursuit.

The grief-stricken Albrecht appears with his faithful squire, Wilfride. Though Wilfride begs his master not to linger near the fatal tomb, Albrecht sends him away. Soon thereafter, Albrecht, in his state of sorrow, believes he sees the ghost of Giselle. He tries to embrace her, but he cannot. She looks at him lovingly and throws him some roses. Giselle disappears back into her tomb. Albrecht is about to depart the scene when he sees Hilarion.

Hiding behind a tree, Albrecht watches as the poor hapless gamekeeper, frightened nearly to death and begging for pity from the Wilis, is forced to dance himself to exhaustion. The cruel Wilis throw him into the pond and then begin dancing amongst themselves.

Then, to Albrecht’s horror, Myrtha spots him in his hiding place: a fresh victim! Desperately, he tries to escape, for he knows what cruel fate awaits him. But Giselle re-appears miraculously, takes him by the hand, and leads him to her tombstone, a marble cross, which holds a power even stronger than that of the Wilis. Just as Myrtha is about to touch him with her scepter, it breaks in her hands. Myrtha is furious at her loss of power.

As a last resort, and seeking revenge on the Wili who robbed her of her prey, Myrtha extends her hand toward Giselle and casts a spell on her. Giselle begins a slow, graceful dance, as though transported by an involuntary delirium. Albrecht is unable to resist the Wili Giselle and he leaves the cross—the only thing that could protect him—and begins dancing ardently with her. Giselle has no choice but to keep dancing, for she is under Myrtha’s spell. Albrecht becomes exhausted.

Just as it seems Albrecht will dance himself to death, the first rays of the sun appear. It is morning! The chimes strike four. Albrecht’s life is saved. Because the Wilis lose their power in daylight, they must withdraw. Giselle, too, must return to her grave. Albrecht kneels by her and gives her a kiss, as if to restore her to life, but Giselle seems to say that she must obey her fate and leave him forever. Suddenly, loud fanfares are heard; Wilfrid, the faithful squire, arrives on the scene with the Prince and Bathilde, whose efforts, he hopes, will be more effective than his own in persuading Albrecht to leave this place of sadness. Giselle points Albrecht toward Bathilde, as if to tell him it is her last wish that he marry the young noblewoman. Albrecht is heartbroken, but the Wili’s command to him seems sacred. With sorrow, Albrecht gathers up the flowers on her grave and lovingly presses them to his lips and to his heart. As he falls into the arms of those who surround him, he reaches out his hand to Bathilde.