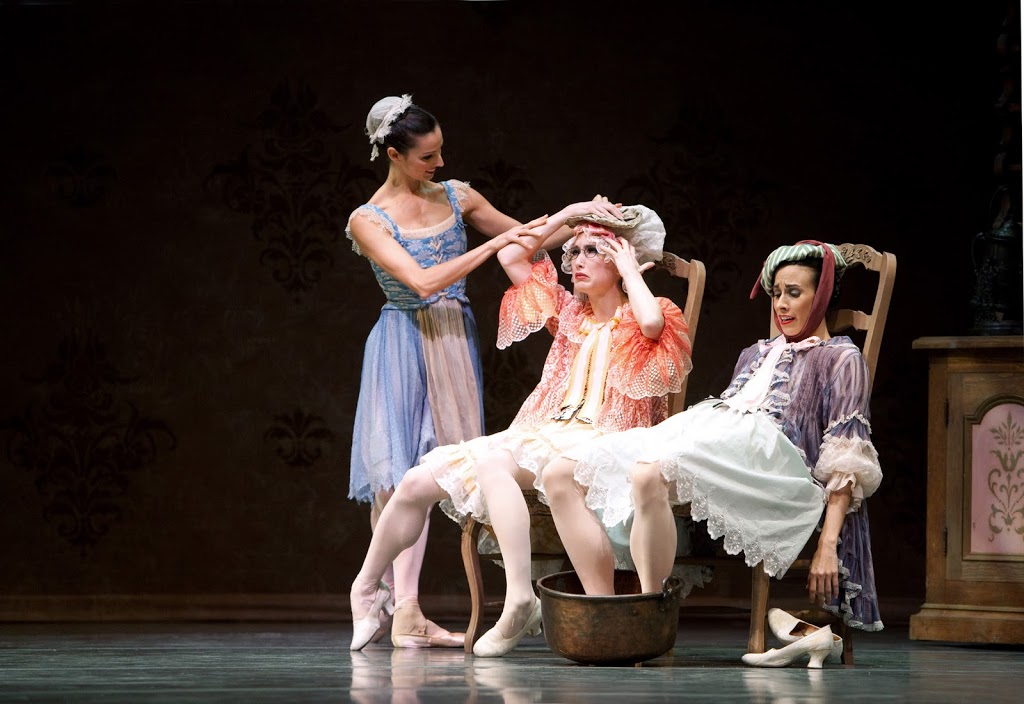 As the curtain rises, Cinderella is daydreaming about a happier life some day in which she will be loved and valued. Her fantasy is interrupted by her stepmother and her two homely stepsisters, who are busy getting ready for the Prince’s Ball that evening. All three treat Cinderella as if she is their servant and force her to do menial tasks. Although her father loves her very much, he is hen-pecked by his wife and unable to protect Cinderella from this abuse. Still, Cinderella remains cheerful and helpful to everyone.

Suddenly, an old beggar woman appears, and Cinderella befriends her. Something about this mysterious figure reminds Cinderella of her beloved mother, who died when Cinderella was young. As she gazes at her mother’s picture in the locket she wears around her neck, Cinderella remembers her happy childhood and her loving parents.

Her reverie fades and preparations for the ball move into gear. Clothiers, wigmakers, and milliners all display their finery and dress the family for the great event. A dancing master arrives, who tries to coach the clumsy stepsisters in a few steps. Finally, everything is ready, and the family departs for the ball. Only Cinderella is left behind. Wishing that she, too, could go to the ball, she imagines she is there dancing with the Prince.

Again, the mysterious old beggar woman appears. This time she reveals her true identity as Cinderella’s beautiful Fairy Godmother. Bringing on the four seasons, she shows Cinderella the possibilities that life holds for change and happiness. After an exuberant dance of celebration, the Fairy Godmother and the four seasons bestow on Cinderella everything she needs to go to the ball, including a golden coach. With a final warning that she must leave the ball by midnight, they bid her a fond farewell.

At the Prince’s palace, a magnificent ball is underway. The Prince enters and greets his guests, including the stepsisters and their ambitious mother, who are eager to attract his special attention. When Cinderella arrives, all the court is captivated by her loveliness, especially the Prince. Making their way through the waltzing couples, Cinderella and the Prince dance for each other, conveying their joy that they have met.

The Master of Ceremonies then calls for the evening’s entertainment, and a Theatre of Marvels presents a drama for the Prince and his guests.

As the entertainers depart, the court moves to the balustrade to admire the evening sky. Left alone, the Prince and Cinderella dance a pas de deux of wonder and discovery. The court returns for the last dance of the evening, and Cinderella, caught up in her reverie, forgets the Fairy Godmother’s warning. As she realizes that the clock is striking midnight, she flees in panic, leaving the Prince and the court bewildered at her abrupt exit. Only the glass slipper remains as a clue to her identity.

At home, again among her menial tasks, Cinderella remembers the amazing events that have given her a glimpse of the happiness she seeks. Her stepsisters, for their part, grumble that the Prince has overlooked them in favor of the mysterious newcomer. Meanwhile, the Prince searches for the woman whose foot fits the glass slipper.

Eventually, the Prince arrives at Cinderella’s home, where not only her stepsisters but even her stepmother are determined to try on the slipper. To their astonishment, it is Cinderella’s foot that fits perfectly.

Acknowledging their love, Cinderella and the Prince are transported to the Fairy Godmother’s realm, where love reigns happily ever after and fondest dreams do indeed come true.